According to recent news reports of sales figures, this holiday season is looking good.  And it has been good for us so far.  So thank you all for being loyal First Vine customers and coming through at the end of the year!

With deliveries, Cy and I are just getting Christmas in under the wire, including our annual Eggnog Fest, called “Nogageddon” this year.  It’s our 10th year of hosting a Christmas party featuring sweets and eggnog that we make ourselves.  It may seem odd for wine purveyors not to hold a wino party, but we have lots of friends who don’t drink.  So we thought we’d make something that everyone could enjoy.  (And of course we serve wine too.   We just can’t help ourselves…)

The idea is to make eggnog without booze, then let people add alcohol to their own glasses.  We put out practically everything in the liquor cabinet.  This has led to several interesting concoctions, some more memorable than others.  My personal favorite is adding Cointreau, which makes the best creamsicle you’ve ever had. 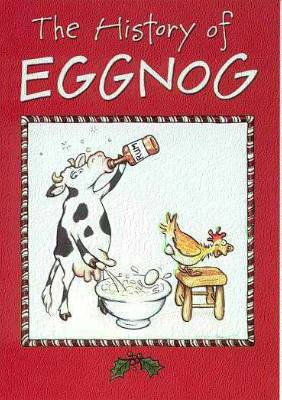 Probably not how eggnog actually developed, but who can resist frolicking cartoon animals?

So instead of a recipe for food and a wine pairing, here is my recipe for classic eggnog, scaled down for two people (instead of the 3 dozen eggs I use for our party).  It will last for a few days in the fridge if you have leftovers.  Or if you have an ice cream maker, make some extra and turn it into ice cream – it has pretty much the same ingredients.  I’ve given you an alcohol suggestion if you want to add it, or leave it alcohol free and do some experimenting.

For some reason, most recipes that include beating egg whites tell you to beat them after you’ve done everything else and then fold them into the rest of the ingredients.  But then you have to clean the bowl and the beaters, and it just doesn’t seem worth it.  So I beat the egg whites first and put them in the serving bowl, then beat the yolks, sugar, and milk and cream.  Why wash everything twice if you don’t have to?

As a bonus, I’m also including a nifty recipe my blogger friend Sue from Food Network Musings sent me.   Some people don’t want to eat raw eggs, and others probably shouldn’t (like children, the elderly, or people with weakened immune systems).   Sue makes a cooked egg custard and then folds in whipped cream.  It’s equally delicious and you can feed it to anyone who isn’t worried about the calories.

Either one of these recipes makes a great Yuletide drink.  I hope you’ll try them out – and have a wonderful holiday!

Eggnog — the raw and the cooked

Beat the egg whites (using the whisk attachment if you’re using a stand mixer), starting on low speed until they begin to foam, then raising the speed to high.  When they start to form soft peaks, slowly pour in ¼ cup of sugar and continue to beat until the whites are glossy and form stiff peaks.  Scrape the beaten whites into a serving bowl with a spatula.  Then add the egg yolks to the mixing bowl and beat for a couple of minutes on high speed.  Add the remaining ¼ cup sugar, one tablespoon at a time, and continue beating for a few minutes until very light and fluffy.  You’ll know you’re done when you stick a finger in the mixture and you don’t feel any grit from the sugar.  Then mix in the milk and cream, making sure to scrape the bowl thoroughly.  Pour the yolk mixture over the whites in the serving bowl, then gently fold the two together.  Sprinkle with grated nutmeg to taste.

For an alcoholic version, add between ½ cup and 1 cup of bourbon or rum to the yolk mixture before you add it to the beaten whites.  You can also add a mixture of bourbon and brandy.

2 cups whole milk, heated until it just comes to the boil

Beat the eggs with the 5 tablespoons sugar until the mixture is thick and lemon-colored.  Keep beating the mixture and slowly add ¼ cup of the heated milk.  Transfer the mixture to a small heavy-bottomed saucepan.  Whisking all the time, slowly add the rest of the hot milk.  Cook over medium low heat, stirring all the time, until the custard measures at least 160 degrees F on a candy thermometer.  (That’s hot enough to kill the harmful bacteria – you can go to 170 without difficulty, but the mixture might start to curdle at 180).  The foam on the top will be mostly gone.  Immediately take the mixture off the heat and strain it through a fine strainer.  Chill the mixture, then fold in the whipped cream.  Top with freshly-grated nutmeg.

For an alcoholic version, stir ½ cup brandy and 2 tablespoons rum into the cooled egg mixture before you fold in the whipped cream.