Wine at the Crossroads

One of the questions I get asked most often is how I pick wines for first vine.  Everyone seems to want to romanticize the process, thinking of me wandering the French countryside and happening on great wines by chance. 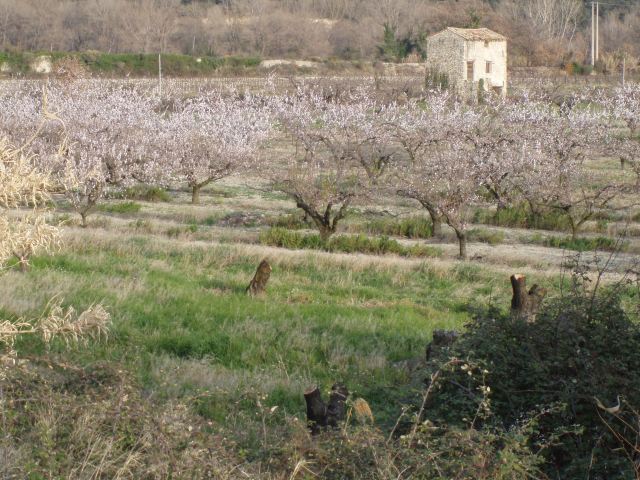 Another day, another lovely French view. Missing: the old man in a beret!

You know, driving on those narrow, winding country roads past magical villages (windows wide open, the scent of lavender wafting in) until I see a rustic, faded sign for a Domaine or Château; turning onto a rutted dirt road to the 200-year-old winery…where I’m then greeted by a man or woman from French central casting (in colorful native garb) who seems delighted to interrupt his or her day to pour me wine and chat for hours.

The reality is more prosaic.  There are more than 27,000 wineries in France.  The Rhône valley, where most of first vine’s wines come from, has about 6,000 of them, so I could be wandering a good long time!  It’s true that I’ve seen my share of beautiful wineries and colorful winemakers (some even wearing berets), but most of the time they’re visits based on recommendations of people I trust and with definite appointments.

And then there are other times when great wines really do fall into our laps.

A few years ago, Cy and I decided to take a few days of vacation in Southwestern France, staying at a lovely hotel called Cap de Castel in Puylaurens.  The owners, David and Pascal, have a wonderful restaurant in the hotel, and of course buy wine to stock it.  Before our stay, I asked David to recommend a couple of wineries that Cy and I could visit just for fun.  Once he heard we imported wine, he made arrangements for three producers to come to the hotel on a Saturday afternoon and bring wines for us to taste.

It happened that it was a chilly, rainy day, providing the perfect opportunity to stay in the restaurant with its enormous fireplace to keep the cold at bay.  Over the course of a rather tipsy afternoon Cy and I tasted 27 wines, and because of that visit we now buy Vins du Pays d’Oc from Domaine de Mairan in Puisserguier (Languedoc) and AOC Gaillac wines from Domaine la Croix des Marchands in Montans.  Lucky finds, both of them. 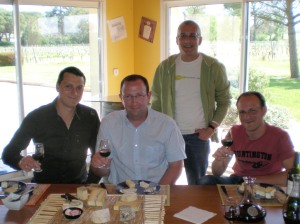 Lunch at Domaine la Croix des Marchands (the cheese course, with eight amazing cheeses…) From left to right: David, the sales manager; Jerome, the owner and winemaker; me; and François, the assistant winemaker.

But until now, we hadn’t visited the actual vineyards.  So this trip over, Cy and I went back to stay at Cap de Castel and visited Jean-Baptiste Pietavy at Domaine de Mairan and Jerome Bezios at Domaine la Croix des Marchands.  Both men are the owners and winemakers – but their wineries are very different.  I’ll introduce M. Pietavy in another post, but this time I want to tell you about M. Bezios and his wines.

The Gaillac wine region surrounds the city of Gaillac in the Tarn département of the Midi-Pyrénées region in southwestern France.  Gaillac isn’t far from Albi, the city that gave its name to the Albigensian crusades against Cathar heretics in the 12th and 13th centuries.  They figure prominently in all that DaVinci code stuff.   Catharism, which was considered a serious threat to the authority of the Roman church, took hold not only because of the relatively independent spirit of the region’s inhabitants, but because of its isolation as well.  There are at least three mountain ranges passing through, and getting from one place to another almost certainly means crossing over at least one of them.

Still, many managed to do it.  Montans, the village where Jerome’s winery is located, was important for pottery production in the Roman empire.  And because of that, Montans and the Gaillac region became crucial for the pottery trade, leading to a trading crossroads (literally, “croix des marchands”) that brought Montans’ clay wine vessels to northern Scotland and southern Spain.

Not surprisingly, with the production of wine vessels came wine itself.  AOC Gaillac wines are made mostly from local varietals:   Duras and Baucol for the reds, and Mauzac and Len de l’El for the whites.  Gaillac wines also contain Syrah, Cabernet Franc, and Muscadelle, grapes found elsewhere in France.

Jerome has two properties:  Domaine la Croix des Marchands, where the winery is located, southwest of Gaillac, and Château Palvié, east of Gaillac and with completely different soil and terrain.  The Palvié wines are aged longer and almost always in oak (like the Sécrets Rouge, made from 100% Syrah, and the Sécrets Doux, a sweet dessert wine made from Muscadelle and Len de l’El), while most of the Marchands wines are for everyday drinking, including aperitifs and desserts (everyday wine drinking in France is a bit different, after all.)  Jerome is the maker of Methode Gaillacoise, a naturally-sparkling demi-sec white wine that’s one of first vine’s best sellers.  His Domaine la Croix des Marchands Gaillac Rouge ($13, made from Syrah, Duras, and Braucol) and Gaillac Blanc Sec ($12, made from Mauzac and Muscadelle) are great everyday wines and excellent values.

This place is the cleanest winery ever. But it still has that wonderful winery smell — bottle that and you will definitely be rich!

Jerome comes from a long line of winemakers.  He keeps to tradition but in a winery he rebuilt four years ago to take advantage of modern techniques, like low-temperature fermentation, which allows for greater flavor development, and state-of-the-art microfiltration, which means that Jerome can bottle some of his higher-production wines on demand.   Jerome believes that keeping them in the large vats, with precise temperature control is better for the wine than storing it in bottles.  Of course, the fine small-batch wines benefit from bottle aging, and Jerome bottles those entire batches once each year.  The winery is by far the most spotless facility Cy and I have ever seen, even compared to some of Napa’s showplaces.

This attention and care shone through in the lunch that Jerome made for us too – he’s an excellent cook as well as winemaker.  We got to sample all the latest available vintages and have a wonderful meal that included a pork stew Jerome learned to make from his grandmother.  I’d never had pork cooked the way you would make beef stew with red wine, but it was delicious.  Part of the trouble is that we’ve been taught that “other white meat” stuff about pork, which is fine for quick cooking, but doesn’t work in a stew because it doesn’t have enough fat for longer braising.  Pork shoulder does, though, and so does what is essentially an uncured and unsmoked ham (which comes from the leg).  It also helps to keep the meat in fairly large pieces (about 6-7 ounces each) so they won’t dry out.

Because of the long cooking and concentration of flavors, I don’t like to use wines aged in oak for braising, so try the Gaillac Rouge in the stew, and you can serve it with the meal too.  Or, since you’ve used a whole bottle to make the recipe anyway, try the Sécrets de Château Palvié Rouge (on sale for $14) with the meal for a little extra elegance.   But definitely try the pork cooked this way – and save the white meat for another meal.

Cordes sur Ciel, truly picturesque, is everything people imagine French villages to be.

PS – after visiting Jerome, Cy and I did go to one of those magical villages, Cordes sur Ciel (literally “on the sky”) which was utterly charming, and every bit as romantic as we’d expect from a small French village.  Sadly, there’s no winery there, although the shops do sell Jerome’s wines.

2 large onions, peeled, cut in half through the poles and then sliced

In a 3 or 4 quart saucepan, combine the stock and all the wine except 2 tablespoons and bring the mixture to a boil.  (Set the 2 tablespoons of wine aside.)  Reduce the heat, then allow the mixture to boil until it has reduced to around 4 cups of liquid, about 20 minutes or so.  Preheat the oven to 325 degrees F.

In the meantime, salt and pepper the pork pieces and let them sit while you cook the onions.  Heat ¼ cup of olive oil in a large Dutch oven with a tight-fitting lid.  When shimmering, add the onions with a little salt and pepper, and cook them over medium heat until they just start to brown, about 10 minutes, stirring occasionally so they don’t burn.  Add the minced garlic and cook for a minute.  Using a slotted spoon, take the vegetables from the Dutch oven and let the excess oil drip back into the pot.  Add the vegetables to the wine and stock mixture.

If the Dutch oven looks a little dry, add some more oil and let it heat to shimmering.  Put about a cup of flour on a dinner plate and dredge four of the pork pieces in the flour, shaking off the excess.  Lightly brown the pork pieces on all sides in the hot oil, then take the pieces out and repeat the process with the remaining four pieces of pork, adding more oil if necessary.

Add the tomatoes to the pot, mashing them with the spoon, and scraping the bottom of the pot to dislodge the flavor bits.  Add a teaspoon of salt and some more pepper, then add the wine/stock/vegetable mixture and the pork to the pot, along with the rosemary branches.  Bring it to a gentle simmer on the stovetop, then cover the pot and put it in the oven for an hour.

After one hour, carefully take the pot from the oven, uncover it, add the carrots, replace the lid, and put the pot back in the oven for an hour and a half.  The pork pieces should be tender and nearly falling apart.  Remove the pork and carrots from the pot and set them aside in a bowl covered with foil.  Strain the liquid in the pot through a fine mesh strainer and press on the vegetables to release all their juices and flavor.

Add the strained liquid back to the pot and set the pot over medium heat.  Taste the liquid for salt and pepper, and add the reserved 2 tablespoons of wine and the teaspoon of minced rosemary.  Let the mixture boil for a couple of minutes to reduce a bit until it has a saucy consistency.  Add the pork and carrots back to the pot to heat through.