Be thankful we’re not Pilgrims and can make this cocktail

We like rosés for Thanksgiving. Not only do they pair well with all the food, but they look pretty on the table, too.

There’s a lot of advice out there on what to drink on Thanksgiving.  We of course think you should be drinking wine with your meal.  Thanksgiving food is a tough pairing for a single wine, since the meal is a unique combination of savory and sweet.  You need wine that will cut through the richness of the turkey and gravy, but stand up to the sweetness of the side dishes, particularly sweet potatoes.

We think French rosés fit the bill.  They’re kind of chameleon wines — when you have a bite of turkey, they taste dry and crisp.  When you take a bite of candied sweet potatoes, they bring out the sweetness (even if there are marshmallows).   And when you pair them with the cornbread and chestnut stuffing in the recipe we’ve got here, well, there’s pretty much nothing better.  This is the recipe people ask us for most often, and it’s delicious.  You can serve any of our fabulous rosés — Cave la Romaine Tradition ($10), Cave la Vinsobraise ($12), or Bodega Hiriart ($13, and it’s wonderful even though it’s not French) and you won’t go wrong.

But when we have gatherings of family and friends, we sometimes hanker for a cocktail.  I had one that was perfect for fall holidays when I was out in Portland, OR for the Wine Bloggers Conference and ate at Little Bird, a French Bistro.  The drink was called Dent-de-Lion, which means dandelion in French.  (I’m guessing that the jagged leaves of the plant reminded some French person of lion’s teeth — probably someone who had had too many cocktails…)  It tastes like fall, with allspice and cinnamon flavors and hints of orange.  Perfect before Thanksgiving dinner or after you have your pumpkin pie.

The bartender at Little Bird very kindly gave me the recipe.  It’s definitely a luxury item since it contains cognac and Grand Marnier.  You might be tempted to skimp and use ordinary brandy and another orange liqueur, but you’ll be sorry if you do.  Dent-de-Lion also has two ingredients that may be hard to find:  Orgeat, an almond-orange syrup, and Allspice Dram Liqueur, which comes originally from Jamaica.  They’re also on the expensive side, and I’m always reluctant to buy liqueurs and mixers that I can pretty much use for only one thing (cognac and Grand Marnier are staples in my house, since I like Crepes Suzette).  Luckily, though, you can make relatively small amounts of both of these at home.  In fact, if you start this weekend, you can have everything ready to serve the cocktails on Thanksgiving Day. 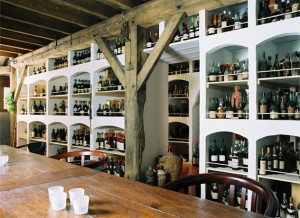 No need to raid the cellar for dusty bottles for the Dent-de-Lion cocktail, but do use cognac and Grand Marnier, please!

Start the allspice liqueur on Saturday morning.  You’ll need a quarter-cup of whole allspice berries, which just happens to be the amount in a 0.75 ounce container.  Grind or smash the berries into large pieces and let them steep in rum with a cinnamon stick you’ve broken in pieces. Make and chill the sugar syrup on Wednesday, then on Thursday morning strain the allspice and cinnamon out of the rum and mix it with the sugar syrup.

You can make the almond syrup on Wednesday evening.  Add the orange flower water if you have it.  Or you can use a couple of drops of orange extract instead.  Since there’s already orange liqueur in the drink neither is strictly necessary.  But if you make Middle-Eastern food at home you probably have the orange flower water anyway, and it adds a nice aroma.

You may think this recipe is a lot of work for a cocktail. But since my kitchen looks pretty much like this for a week before Thanksgiving, it’s not that much extra work.

Some of you are probably reading this and thinking I’m totally nuts to go to this much effort for a drink.  But if you’re like me, you’ll be making things for Thanksgiving Day all week, so a little more won’t make a difference.  And a drink with homemade ingredients — especially one that tastes this good and goes with the holiday — is worth it.  If you’re having guests who don’t mind doing a little home mixing, ask them to make and bring the syrup and the liqueur.  It definitely beats having everyone show up with green bean casserole.

Have a wonderful Thanksgiving, and safe travels!

Dent-de-Lion Cocktail (adapted from Little Bird Bistro in Portland, OR)

1/2 cup almond syrup (4 fluid ounces, use Orgeat or the recipe below)

1/4 cup allspice liqueur (2 fluid ounces, use St. Elizabeth’s brand or the recipe below)

Combine all the ingredients except for the seltzer in a pitcher.  Add ice and stir.  Strain into eight highball glasses filled about two-thirds with ice.  Top with a splash of seltzer, stir, and serve.

Heat the sugar and water in a small saucepan, stirring until the sugar dissolves and the mixture boils.  Add the ground almonds and stir until the mixture just boils again.  Turn off the heat and cover the pan.  Let the mixture steep for at least 3 hours or overnight (no more than 12 hours).

Strain the mixture through a coffee filter, then gently squeeze the filter to remove more liquid.  Stir the orange flower water (if using) and the vodka into the syrup.  Put the mixture in a covered jar and chill until you’re ready to use it.

Put the allspice berries in a ziplock-type bag and close all but an inch of the fastener.  Put the bag on the counter and pound it with the bottom of a heavy pot until you have pieces of allspice in the bag.  Don’t go too far, you don’t want a powder.  Put the allspice pieces in a jar and add the rum.  Break the cinnamon stick(s) into small pieces and add them as well.  Put the lid on the jar and shake vigorously for 30 seconds. Let the mixture sit at room temperature for 5 days, shaking it vigorously for 30 seconds once per day.

The night of the fourth day, combine the water and brown sugar in a small saucepan.  Heat and stir until the sugar completely dissolves and the mixture just comes to a boil.  Turn off the heat and let it cool.  Then put the sugar syrup in a jar, cover, and refrigerate overnight.

The fifth day, strain the rum mixture through a coffee filter.  Add it to the cold sugar syrup in the jar and keep the mixture in the fridge until you use it.  It will keep for a couple of months before the flavor starts to fade.