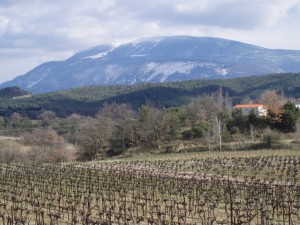 Mont Ventoux, the “giant” of Provence, was the end of a stage of the Tour de France this year. Cy and I have driven up, but never cycled it.

It’s Tour de France time again!  On Sunday, July 14, the racers departed from Givors, just south of Lyon, and ended the 15th Stage at the top of Mont Ventoux in the Vaucluse, riding 242.5 km.  Monday was a rest day, and on Tuesday the racers departed again, this time from Vaison-la-Romaine, and riding to Gap, 168 km to the east.

The Tour passes through the part of France that produces most of the wine that we import for First Vine, so it’s great fun to see familiar sights watching the race on television.  Cy and I have visited often enough that even just watching I can remember how winding and hilly some of the individual roads in the race are, even the ones that aren’t going up the side of Mont Ventoux.

I’ve written about Vaison-la-Romaine before, and Cave la Romaine, the cooperative winery there.  Vaison has probably the best weekly market I’ve ever seen, and the town is charming but large enough to have the amenities you’d like in a place (restaurants, grocery stores, a great museum, etc.)  Yet you can be only a 15-minute walk away from the center and be in the middle of the countryside.  Cave la Romaine is one of the larger co-ops in the region, and with grower/owners from many of the surrounding villages it has a large range of wines.  The villages where the grapes are grown have designations of Côtes du Ventoux, Côtes du Rhône, Côtes du Rhône Villages, and even a cru or two.  There are also some Vins de Pays, and even a sparkling Chardonnay. 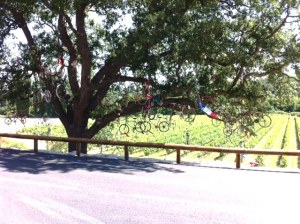 Our friend Diane Simmons-Tomczak lives near Vaison-la-Romaine and took this photo of one of the town’s decorations for Bastille Day and the Tour de France.

We’ve been buying wines from Cave la Romaine since 2007.  While the wines have always been good, in the past few years the cave has taken steps to differentiate its wines in terms of typicity and terroir.  The most interesting change to me is with the wines at the Côtes du Rhône Villages (CdRV) level.   As I’ve tried to explain before, CdRV is a high-quality designation, but with two different naming conventions.  Sometimes you just see the words “Côtes du Rhône Villages” on the label, and sometimes you’ll also see the name of a village after them, like “Côtes du Rhône Villages Séguret.”  Not all of the 30 or so CdRV villages are allowed to use the village’s name — it’s generally a matter of how much vineyard acreage in a particular village qualifies for CdRV designation.  But no village name can also mean that the wine is a blend of different CdRVs, whether from named villages or not.

Cave la Romaine had traditionally offered a few CdRV wines without a particular village name on them, although some of the grapes did come from named CdRV villages.  You can still buy a couple of those wines at the co-op and they’re very good.  But beginning with the 2009 vintage, the co-op found itself with outstanding grapes (grown with the required, minimally-invasive methods) from three different named CdRV villages and decided to vinify and bottle them separately, making CdRV wines labeled Séguret, Puyméras, and Roaix. 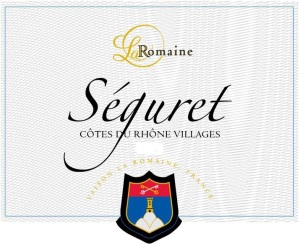 One of the CdRV wines from Cave la Romaine. Séguret’s vineyards are on a wide-open plain with plenty of sun.

Here’s where the terroir part comes in:  the co-op’s winemaker and management team decided to make those three wines with exactly the same composition of grapes, 70% Grenache and 30% Syrah, the same fermentation techniques, and the same aging in concrete tanks before bottling.  The result is three wines that differ only in where the grapes were grown, which allows you to taste the influence of the terroir of those named CdRV villages.

As I mentioned in a previous post, with the glamorization of all things “artisinal,” it has become fashionable to denigrate co-ops as little more than wine supermarkets.  This is both unfair and untrue.  There are better co-ops, to be sure, just as there are better independent producers.  But you couldn’t have an experiment like the three CdRV wines anywhere except at a cooperative winery.  Even if you could find a producer in each village growing grapes of similar quality from vines that are approximately the same age, you would still have three different winemakers at work.

I picked two of the three villages, Séguret and Puyméras, to carry via First Vine (both are $15).  Partly because I liked those two best, and partly because they’re the furthest away from one another geographically of the three villages.  Puyméras is northeast of Vaison, on the edge of the Mont Ventoux foothills.  The vineyards are at different elevations with different sun aspects.  Although the actual village of Séguret is on a small mountain/large hill (like all self-respecting medieval fortresses), the vineyards are in the valley to the west-southwest of Vaison.  It’s warmer there than in Puyméras, and the grapes definitely get sun for longer during the day.  2010, the vintage we carry, is a good year for comparison because it wasn’t too warm or too rainy, which would make various flavors predominate.  Just a normal year. 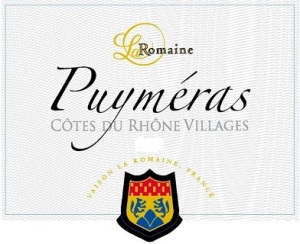 Another CdRV wine from Cave la Romaine. Puyméras is in the foothills of Mont Ventoux, with varied terrain and sun exposure.

So how are the wines different?  Everyone experiences taste a little differently.  I poured them at a tasting Cy and I did at Alliance Française here in DC, and a few people tasted no difference at all.  After that, opinions were varied.  They both taste like good red wines from the southern Rhône valley, which means they’re earthy, fruity, spicy, and smooth.  I think one is a little earthier than the other, maybe a little wilder, while the other is a little fruitier and perhaps a little spicier.

But which one is which? You might be able to tell from the hint above, but to be sure you’ll have to get them both and try them yourself.  Invite a few friends, and cover over the labels.  Taste them one right after the other, with a little bread in between to clean your palate.  Decide which one you like better and how they differ.  Then check the labels to see which one was from which village.

As I’ve said before, one of the things I love about southern Rhône wines is the variety of wines in a relatively small area.   Some people find it hard to taste the variations, but over the years I’ve come to be able to identify and appreciate the differences.  Practice makes perfect, after all.  Many of you have asked me what it’s like to taste wines and decide what to buy.  Well, here’s your chance to make that kind of decision when faced with two wines like these.  They’re similar but different.  Which one would you buy?  Try them and decide.  Then raise a glass of either (or both) for the Tour de France finale on Sunday — after all, how often do you get to celebrate an international spectacle with wine made in a place that’s actually part of that event?

After you finish the tasting you’ll have wine left over, so try this recipe for a simple mushroom appetizer/finger food dish to serve with those half-empty bottles:  King Oyster Mushrooms with Herbed Chêvre and Parmesan Cheese.  You could use shiitake mushrooms if you can’t find king oysters, but the king oyster mushrooms have such a lovely subtle meaty flavor that they’re hard to duplicate.  I’d never tried them until Cy and I had them at a dinner party a little over a year ago.  I later learned that they’re also called trumpet royale mushrooms, and they’re sometimes used as a substitute for meat or abalone in Asian cooking.  They’re easier to find these days, partly because they’ve been taken on as a trendy ingredient in many restaurants.

The appetizers are easy to prepare and assemble — slice and saute the mushrooms and set them aside.  Mix soft goat cheese with soft butter and herbs (or start with herbed goat cheese if you like) and spread it on baguette slices.  Top with a piece of mushroom, then shave some Parmesan cheese strips with a vegetable peeler and place them on top of the mushrooms.  At this point you can serve them, or put them in the oven for a few minutes to warm through.  Pour the wines and enjoy — if you’ve done the taste test you’ve done enough work for one day!

Preheat the oven to 375 degrees F.  Then, slice the mushrooms.  Cut them lengthwise into 1/4-inch slices — you’ll get 4 or 5 slices from each mushroom, depending on size.

Heat one tablespoon of the olive oil in a large non-stick skillet over medium heat.  When hot, add one-third of the mushroom slices.  Sprinkle them with salt and pepper.  Raise the heat to medium-high and cook for about 3 minutes, turning once, until they’re lightly golden.  Transfer the mushrooms to a dinner plate and repeat twice with the rest of the mushrooms.

When the mushrooms are cooked and cooling, put the goat cheese, butter, herbs, and a little salt and pepper in a medium bowl.  Using a fork, mash everything together.  Spread the cheese mixture over the bread, then top each piece with a mushroom and set the pieces on a baking sheet.  Using a vegetable peeler, cut 24 shavings of Parmesan cheese, each about 4 inches long.  Set the shavings on top of the mushrooms.  Put the sheet in the oven for 5 minutes, until everything is just heated through and the Parmesan starts to glisten.  Remove the pan from the oven and drizzle the appetizers with a little more olive oil.  Serve warm or at room temperature.