It’s organic because *I* say it is 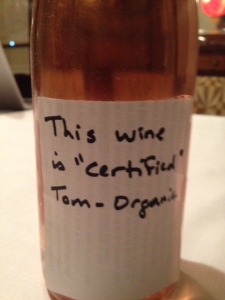 Technically it should be called “In Organic Converion,” but I like the sound of Tom-Organic better, don’t you?

Right after new year’s day Cy and I went to dinner with friends at a really good DC restaurant.   The food was excellent and it had a great 200+ bottle wine list.  But what most intrigued me was that every wine listed was followed by the letter O, B, or S.  And up at the top of each page was an explanation that the wine was made following “organic (O), biodynamic (B), or sustainable (S) practices.”

Since there were enough of us to justify ordering an O, a B, and an S, that’s what I did.  When the bottles arrived I noticed that none of the wines was actually labeled as organic, biodynamic, or sustainable.  I asked the server about it.   She told me that the owner was really into wine and decided what designation to give each wine on the list, after discussions with the distributors and importers, and maybe even visiting some of the vineyards himself.

In the weeks since Cy and I went to this restaurant, I’ve thought a lot about this.

There are, I’m sure, more than 200 wines that are certified organic, biodynamic, or sustainable available in the U.S., although I doubt there’s any restaurant with a list containing 200 such wines.  The extra costs of production to meet those standards and the costs of certification would make for a very expensive list.  And this restaurant had plenty of bottles in the $37 to $50 range along with more expensive bottles.

We’ve all seen small wine lists where each wine has a description a few sentences long that tells you what you need to know about how the wine tastes and foods for pairing, but almost never one where you learn how it’s produced.  That would take up a lot of room even on a short list, and would be almost impossible on a list like the one at this restaurant.  But customers want to know this kind of information more and more these days, as they should — after all, if they seek out organic food, they may also seek out wine that is made in a particular way.  Hence the shorthand on the menu.

As an importer, I understand the temptation to assign these kind of attributes to the wines because it’s likely that some of them are very nearly organic or biodynamic.  The producer may not think the certification and its restrictions on practices is worth the cost, even if he or she follows most or all of the rules anyway.  I’ve used those words myself in some of my blog posts, but always with a lot of context to tell you exactly what I mean.

This is the coveted symbol for organic food in the U.S. Almost no imported wine can get this designation because most of the wineries add sulfites.

But this list has no context.  You just see the letters.  So are we to understand that the majority of the “practices” used to make a particular “O” wine conform to the U.S. Department of Agriculture’s (USDA) definition of organic, or just some of them?  Is the “B” wine produced according to the lunar cycle but skipping the buried cow horn (not kidding here)?  Is the “S” wine made by a winery that actively tries to reduce water and energy use, or one that simply uses recycled glass bottles and natural corks?

I don’t doubt that the owner knows how each wine is made, and I’d enjoy having a discussion about every wine I ordered with him.  The problem is that there are plenty of restaurant owners and sommeliers who try to populate their wine lists with certified wines.  This particular restaurant list allows customers — most of whom won’t read the bottle labels or look for certifications — to think these wines are made under certified designations, using the word “practices” as a disclaimer.

Unfortunately, the owner who put the list together also benefits from the fact that there are a lot of people who think that the terms are all equivalent, or at least all good things they should look for.  The truth is that it’s complicated, and even those of us in the wine business can get confused.  Here are some things to keep in mind: 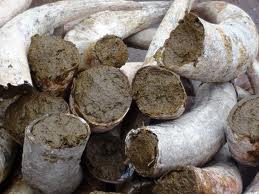 You think I was kidding about the cow horns? In biodynamic farming, manure-packed cow horns are buried to help nourish the vines. (Photo from winemakingnomad.wordpress.com)

Once they get past the certification requirements and the cost of certification, wine producers have to jump other hurdles before their wines can be properly labeled.  For foreign wines, an entity approved by USDA in the producers’ home countries has to certify that each producer’s organic practices are in line with USDA requirements (and produce that certification in English, of course).  It’s no easier for biodynamic wines, since Demeter USA has a registered certification mark on the word biodynamic in the U.S. and won’t automatically accept other biodynamic certifications (even those by other countries’ versions of Demeter), plus requiring importers to pay Demeter USA a hefty fee.  There’s no specific barrier that I know of to acceptance of foreign-based sustainability certifications, although the wineries with those certifications would have to provide documentation in English that would satisfy the U.S. labeling authorities.

So you can see how difficult this all is — time consuming and costly, in addition to all the requirements for actual production.  Still, some producers and importers have gone through the trouble of meeting all the certification and labeling requirements.   And while I understand wanting to give customers more information, it isn’t fair to capitalize on the words if the requirements aren’t met.   Or capitalize –intentionally or not — on customers’ understandable confusion on what all these words mean.

If you’re read all of this, my thanks!  Now, how about a drink?

Not long ago, I was reading a New York Times article about Ralph Lauren’s Paris restaurant, modestly named “Ralph’s.”  Evidently it has become a home-away-from-home for Americans living (or at least spending a long time) in Paris.  As you’d probably expect, Ralph’s is a bit over the top.  Cy and I definitely long for familiar foods when we’ve been traveling, but I still had to chuckle when I read this:

There’s no real definition for sustainability, but a lot of people think it’s kind of recycling on steroids. (Photo from calgreeks.com)

” ‘There is a point in my travels when I want to get home for a minute,’ said Joseph Ferrico, Nylon magazine’s fashion director, known as J. ‘Just when you’ve had one too many croque-monsieurs at the Café Flore, right across the street you have this amazing oasis.  You can have a cheeseburger and [c]hampagne.’ ”

Believe me, J, I have no objection to a cheeseburger and champagne.  But it’s January and most of us are looking for something a little more modest after all our croque-monsieurs.  Luckily, Ralph’s serves something lighter, too:

“The house drink was a Pink Flamingo, which a very handsome waiter of mixed ethnicity described as a mixture of Cointreau, rosé, and lemon juice,  ‘the perfect mixture of fresh and fruity,’ he said.”

I know I can’t resist that combination (and a handsome waiter wouldn’t hurt, either).  While most Pink Flamingo cocktails are mixtures of vodka,  orange liqueur, and fruit juice, adding the rosé instead of vodka is a great idea.  Particularly since most of us have at least one bottle of rosé left over from the summer.  So I played around with proportions and came up with a recipe that lets you get six lovely cocktails from a bottle of rosé.   Plus a much lighter flavor than the vodka concoctions, and a color that’s a lot more like a pink flamingo.

What if you don’t have a bottle lying around?  Try Domaine Sainte-Cécile du Parc’s Notes Frivoles 2012 ($14).   The 2013 vintage will be certified organic in France, and we’ll be able to put “Made with Organic Grapes” on the label (once I get all the paperwork in, anyway).  The 2012 vintage is in the three-year conversion period, so it can’t be labeled organic even though all of the farming and winemaking practices are the same ones as for the 2013 vintage.  The generally-accepted term is “In Organic Conversion,” but I’m thinking of calling it Tom-Organic.  Has a nice ring to it, don’t you think? 😉

Pour all ingredients in a pitcher with some ice and stir to chill.  Strain into six highball glasses and garnish with a twist of lemon or a stalk of lemongrass.

1 Response to It’s organic because *I* say it is