A drink for gods and man

Signs of wine precociousness:  The infant Bacchus reaches for the grapes in this Roman fresco from the National Archaeology Museum in Madrid. He later became the god of wine, grape vines, grapes, and winemaking — as well as religious ecstasy, madness, and theater.

Cy and I are just back from a trip to Spain and Portugal:  part wine business, part vacation. I’ll be writing about the wines in future posts, but even our “vacation” parts weren’t wine-free, as you can imagine, and the wine theme cropped up in some unexpected places, like an archaeology museum.

After visiting two of Madrid’s “big-three” amazing art museums, we decided on a change of pace and went to the National Archaeology Museum. The museum has been open for more than a century, and for a long time it was the repository of tchotchkes from the Spanish monarchy. There were plenty of them. After all, Spain was the most powerful nation in Europe, if not the world, for a couple of centuries. And up through the 19th century, the Spanish royal families intermarried all over Europe, bringing all kinds of art and treasure back to Spain.

[A note about the photos in this post — Cy or I took them.   The museum is remarkably generous about allowing photography.]

Bacchus as a youth/young man, from a Roman sculpture in the royal collection.

As the 20th century progressed, and especially after Franco’s death, the museum made a serious attempt to document the lives of inhabitants of the Iberian Peninsula through the ages. After a six-year top-to-bottom renovation, the museum unveiled a more unified vision that kept the antiquities acquired by the various monarchies and integrated them into their historical contexts. The result is an outstanding collection, very well curated, and extremely informative.

One thing that struck me was the number of objects related to wine. Most of them are in the Greco-Roman collections, although there were a few Phoenician vessels that could have been used for storing or drinking wine. The oldest wine storage vessels found to date come from what’s now the Republic of Georgia, and certainly the sea-faring Phoenicians would be ideal candidates for bringing wine and wine-making to all parts of the Mediterranean.

But the Greco-Roman objects and sculptures were so much more specific. Coincidentally, I was reading Ina Lipkowitz’s Words to Eat By during our visit, a book exploring the linguistic divide in food words that developed between what is now northern and southern Europe. According to Lipkowitz, the Romans, like the Greeks before them, liked their food to come from a highly-ordered and human-manipulated system. Northern peoples were hunters, foragers, gatherers. Romans and Greeks conquered the landscape and planted crops, and generally made their food more elaborate and “processed” than the northerners.

Among those crops were grapes, both for eating and for making wine. Anyone can make wine accidentally by piling enough grapes in a container – the weight will crush the grapes on the bottom, which will ferment by means of yeast already on the grape skins. But the Greeks and later the Romans took the process, which was already more highly developed than its accidental beginnings, and systematized it. Not only was fermentation a preservative for grapes, but it took them to a higher form that began to figure prominently in religion as well.

Given Spain’s proximity to Rome and its subjugation, it’s not surprising that a lot of Roman antiquities were found on the Iberian Peninsula, particularly the eastern part. More of the large sculptures came later as the monarchs acquired them, but several sculptures and decorative materials were found in what’s now Spain. Greek objects made their way through maritime trade and more than a few shipwrecks. Later, as the monarchy married into families in what is now Italy, more Greek antiquities also came to Spain through purchase. 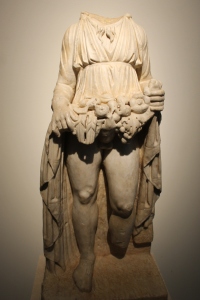 In Greek legend,  Priapus was found by shepherds, who raised him and later admired him for his endless lust. He was also a god overseeing the harvest, particularly fruits and vegetables, including grapes.

Let’s start at the top, with Greco-Roman deities. Not surprisingly, many of the museum’s wine-related objects portray Dionysus/Bacchus in his Greek/Roman religious context. There are a few Dionysus creation stories; wildly different except that they all indicate that Dionysus is the son of Zeus, and was gestated by an attachment to Zeus’s thigh after rescue from death or near-death. Just how he became associated with wine isn’t clear to me. But eventually he became the god of wine, winemaking, grape harvest, and grape vines, as well as religious ecstasy, madness, and theater. I guess the last three are all related to one another, springing from music and dance that came in wine-induced bursts that later became more ritualized.

The museum objects show the historical divide between images of Bacchus as a youth in the Roman antiquities and the adult Dionysus portrayed on Greek vessels as Ariadne’s husband and taking his place on Mt. Olympus among the other gods. The toddler Bacchus is fed grapes and grows into a beautiful young man in Roman sculptures. Bacchus’s youthful image was later used by Caravaggio in his famous painting of Bacchus made during the Renaissance. On the Greek vessels, however, Dionysus always has a beard.  Beards were a sign of maturity in Greek culture.  Beards appear less often in surviving Roman sculpture, although they were always associated with grown men. 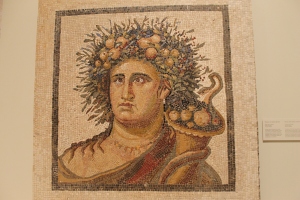 The Genius of the Year was a spirit that watched over the inhabitants of the Roman villa in which this mosaic was found. Part of this protection extended to their food and drink, including wine.

Now for a couple of lesser gods and spirits. While Dionysus/Bacchus was the big kahuna when it came to wine, there were also lesser beings involved who may have been more localized. The museum has a Roman-era sculpture of Priapus that was found in Málaga. Priapus was a Greek fertility god for men because of his legendary staying power, that carries over today in the name of a potential side-effect of those little blue pills. But he was also the protector of livestock and fruit and vegetable crops. This particular sculpture shows him with grapes among the other crops. I couldn’t get close enough to look underneath and see if it was anatomically correct.  [Update:  silly me, I didn’t think to zoom in.  If you enlarge the photo, you can see it is indeed anatomically correct.]

The museum also has a mosaic called “Genius of the Year,” which was taken from a Roman villa located near Madrid. Genii were protective spirits that watched over a home and its inhabitants. In this mosaic, the genius’s hair and cornucopia are filled with foodstuffs, some of which appear to be grapes. So he would certainly have watched over the wine as well. The name “Genius of the Year” didn’t mean that there was a new genius each year, but rather that the genius also controlled the activities that came with the changing of the seasons. 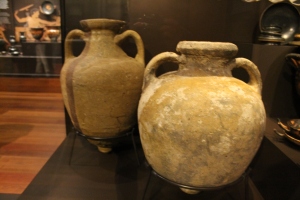 A few Greek wine-related objects. While decorative cups, wine vessels, and pitchers, are often found in art museums, the archaeology museum puts them next to ordinary wine vessels because they came from the same shipwreck. So perhaps not everything had to be decorative, or maybe the wine was transferred from the unadorned amphorae into smaller decorative vessels for serving.

Finally, a more modern royal wine object. The museum keeps a collection of objects used by the royal family for eating and drinking. They’re on an upper floor and way off to the side, since the museum’s purpose is no longer to show off royal wealth. There’s plenty of glassware through the ages, but also a 19th century wine chiller that could easily be used today. Assuming you could lift it when it was filled with ice and wine bottles, that is.

Wine drinking cups, found in the same Greek shipwreck as the amphorae in the previous photo.

If you get a chance to go to the National Archaeology Museum in Madrid, definitely go. It’s art, history, commerce, and everyday life combined. Of course, Rome, Cairo, and Athens have it all over other places when it comes to antiquities. But this is one of the best assemblies of life and history I’ve seen. Cy and I left with a feeling of the sweep of time. And, not surprisingly, a need for some wine!

As you might imagine, we ate extremely well on our trip. I’ll be giving you some recipes for the wines from our Spanish producers in other posts. But after this long post, I figured you could use an easy one. This is Pan con Tomate, or Bread with Tomatoes. While it’s not  tomato season anymore, you can still find pretty good tomatoes around, especially at the farmers’ markets. Buy a couple and make the recipe this weekend, while there’s still time.

A 19th century wine chiller from the royal collection.

The recipe is exactly what it sounds like: bread with tomatoes on top. Instead of rubbing the cut tomato on toasted bread like Italian bruschetta, the key here is to grate the tomato on a box grater using the large holes. Cut the tomato in half along the equator, then start grating. Be sure to hold the tomato in your palm and keep your fingers back out of the way. You’ll get almost all the flesh off and you’ll be left with the skin in your palm. Spoon the grated tomato on the bread, drizzle with some olive oil, sprinkle with a little salt, and eat it. We had this dish with eggs at breakfast, but you could also have it in the late afternoon, or – as we saw in Madrid – as a midnight snack.

You can make this a Pan con Tomate/Bruschetta hybrid by toasting the bread and rubbing it with a cut garlic clove before topping it with tomato. As I’ve discussed before, in my experience Spanish tapas don’t use toasted bread as a base. But this is your snack, right? Do what you like! And pick a nice, easy-drinking wine to go with them. I’m recommending our three Côtes du Ventoux selections from Cave la Romaine: White, rosé, or red. All $10 a bottle, and all delicious. Take it easy on your wallet as well as your kitchen time!

The inside of the ceramic wine chiller. Viva España indeed!

Serves 2-4, depending on appetites

1 large, ripe tomato (any variety or color), or two small ones

1 clove garlic, peeled and cut in half (optional)

Cut the tomato(es) in half through the equator. Put one half in the palm of your hand, and grate the tomato on the large holes of a box grater sitting a bowl. Be sure to bend your fingers back so you don’t accidentally grate them. You’ll end up with lovely, homogenous tomato pulp in the bowl, and pretty much just the tomato skin in your palm. Repeat with the other tomato half.

Spoon the grated tomato on the bread slices. Drizzle with a little of the oil, then sprinkle lightly with salt. Add some pepper if you like. Serve right away if you don’t like the tomato to soak into the bread (which I don’t), or wait until the whole thing achieves your desired degree of soakiness.

Optional Bruschetta hybrid: toast the bread slices and rub each slice with the cut side of the garlic clove halves. Top with tomato, oil, salt, and a little pepper.

2 Responses to A drink for gods and man