New Adventures on the Wine Route 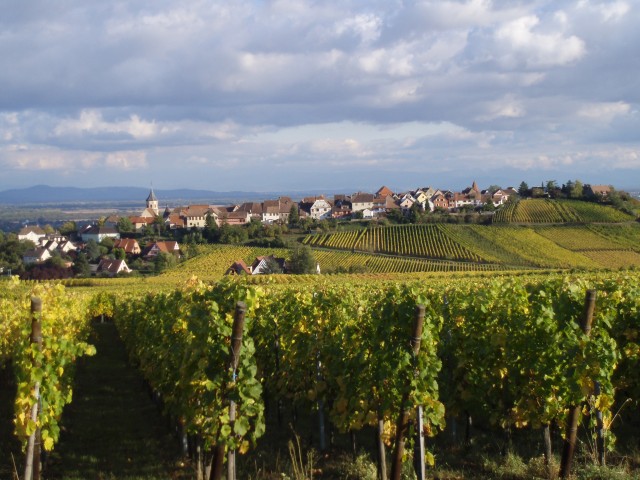 One of the many stops during more than a decade of travel in France looking for wines to import to the U.S. This was in Alsace in 2009.  Not every visit results in a wine purchase, though, and I don’t carry Alsatian wines…at least not yet.

The first book I read when I was thinking of becoming a wine importer was Kermit Lynch’s Adventures on the Wine Route.  And I think if you asked most people in the wine business, they’d tell you it was an early read for them, too.

I read Lynch’s book in 2004, checking it out from the library.  One of my nephews gave me a copy this past Christmas, and it was fun to look back at it with a decade-plus of wine importing under my belt.  (Along with an expanded waistline inside that same belt, no doubt related.)

When the book was published in 1988, it covered 15 years of Lynch’s experience starting in the 1970s.  He’s a good writer, and his portrayals of the winemakers he came to know are vivid.  Probably everyone in the business who has even a casual relationship with winemakers anywhere in the world will find Lynch’s portraits recognizable today.  However, nearly everything else about the wine business has changed since then, and reading the book is almost like looking out your window and seeing someone go by in a horse and buggy. It makes me a little sad to think that I came to the business too late to have experienced the joy of meandering through the French countryside, visiting previously-unknown wineries with barely legible signs, and discovering gems the way Lynch seems to have been able to do.

I mean no disrespect by that – Lynch himself notes the changes in the business over those 15 years, and they’ve only accelerated since.  Thinking back on how I started the business back in 2005-2006 compared to how I travel and select wines now, I’m equally amazed by how much has changed.  Here are four examples:

First off, there are a lot more independent wine producers in France than there were when I first started.  Wandering won’t cut it anymore, you have to have a plan and hit the ground running.  Many of these relatively new independent producers are farmers who had formerly sold their grapes to their village cooperatives.  Elevation of some villages to cru status, like Vinsobres and Cairanne in the southern Rhône valley (and the spate of new crus in the Languedoc as well), has sped this process.  If farmers can earn more starting wine production to make a cru wine than they could selling the grapes to the cooperative, then you’ll see more of them doing just that.  With or without cru elevation, I’ve also noticed that when farming responsibilities pass to the younger generation, the new farmers often decide to make wine in addition to growing the grapes.

A lot of newly-minted winemakers have joined the party without those family connections as well.  In a region like the Languedoc where grape-growing conditions are so good, you’ll find new farmer-winemakers who relish making wines that wouldn’t have been made just 10 years ago.  They’re worried less about the appellation requirements than making what they like.  In the past, they might have decided not to get into the business at all if they had to conform to the rigidity of the appellation/naming rules, but now they know there will be a market for producing what they want to, as long as the quality is there.  An example — on my last importer trip to the Languedoc, I drank an excellent blend of Cabernet Sauvignon and Sangiovese.  I wouldn’t have seen that blend made in the Languedoc on my first trip to the region in 2008, that’s for sure.

On some scouting trips, you can go with your gut about finding great wines.  This is the entrance to a small tasting room in the Languedoc, and the wines were indeed wonderful.  A case where the beautiful tiles advertising the wines turned out to be true!  But most of the time it takes planning and research, in addition to luck.

Part of this diversity is due to my second change issue, the internet.  It has changed our lives, so we’d expect it has changed much about the wine business, too.  Combined with my third point, the rise of the E.U., most winemakers have found they have a built-in marketing tool that they didn’t have before.  While they might have relied on a trade association in the past, they don’t automatically have to now – and they often e-mail directly looking for importers rather than waiting for importers to come to them.  Trade shows have become a lot more sophisticated and business-oriented as well.  The E.U. also created a huge market just beyond France’s border that is much more accessible than it was before.  While many producers are happy to export to the U.S. (it’s a big market after all), some of them are deciding to avoid U.S. requirements and stick to Europe since labeling and other paperwork are easier for them.

Finally, as much as it pains me to say it, France just isn’t the center of the winemaking world that it used to be.  Kermit Lynch could be sure that he could bring over almost any quality wine and it would sell – it would be something new for many of his customers and French wine was still the ne plus ultra.  The wine world is a much bigger place, and customers have a huge variety both down the street at their local shops and at their fingertips online.  Excellent wines come from many places.  And while I think on average French wines are still great values, people are coming to value variety as well.

As I said earlier, though, one thing that definitely hasn’t changed is that I’ve met some of the world’s most delightful people during my 10+ years in the business.  Much is made of the natural reserve most French people seem to have – you hear stories of people talking across their fences for years before one will invite the other to his home.  And that’s true to some extent.  I didn’t see the instant informality of the U.S. when I started buying French wines.  Everything was polite and efficient at first, and continues to be.  But once I had worked with my producers for a couple of years, I started getting invitations to their homes and to meet their families.  A love of good wine often comes with an equal enjoyment of good food.  Add to this that you’re dealing with people who are doing something they love, and nothing makes them happier than sharing what they’ve made with others.  Like Kermit Lynch relates in his book, some of my most memorable times have been spent in the company of my wine producers.  Since that tradition continues, I can’t help but think the rest will work itself out, despite the changes as time goes on.

I tried something new this summer – water bath canning.  The first thing I wanted to do was pickle the hot cherry peppers that Cy grows in pots on our tiny back slab and deck.  And while I could pickle them and just refrigerate them for use if there were just a few, Cy’s green thumb resulted in pounds of them.  So I had to preserve them for longer.  I didn’t want to buy one of those big canning pots, though, and no one I know has one.  But a neighbor told me I could use a big stockpot as long as I had a rack that would fit inside it to keep the jars off the bottom.  All I really needed was the jar lifter tool for getting the jars into and out of the hot water.  So for $6.99 plus the cost of the mason jars, I was on my way to home food preservation. 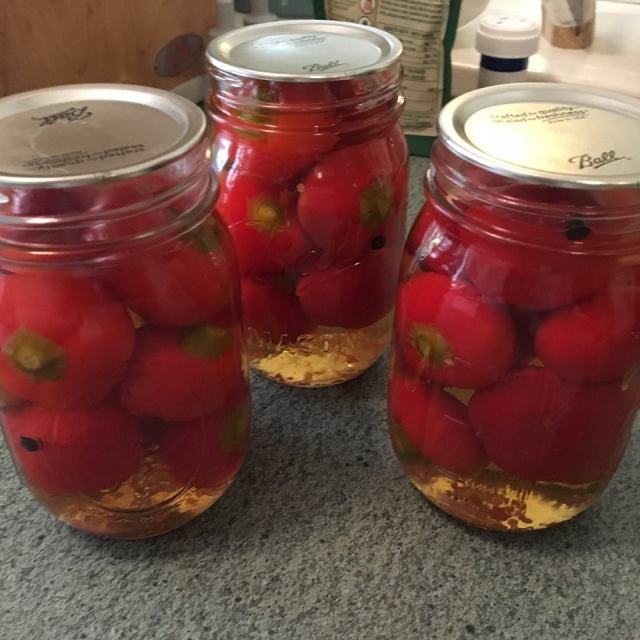 The first batch of pickled cherry peppers this summer, three pints. And there were more to come, too.

After the peppers, I tried canning tomato passata, which is a lightly-cooked tomato puree.  It’s a great thing to do with those “seconds” tomatoes you find at farmers’ markets this time of year.  The passata is pretty versatile, and I know I’ll find plenty of ways to use it.  But the cherry peppers?  Great with cheese, in relishes and Giardinera, on sandwiches, and stuffed with tuna.  I hadn’t really used them in cooking before, though, so I thought I should concentrate on that.

After looking around at various websites for clues, I put together a recipe for boneless thick-cut pork chops in a white wine sauce that also contains the pickled cherry peppers, olives, and capers.  Pretty simple overall, and it cooks up in about a half hour.  Salt the pork chops and set them aside while you prep the rest of the ingredients.  Then flour and brown the chops and put them in the oven to finish cooking.  Cook some onions and garlic in the skillet, add the cut-up cherry peppers, olives, and capers, along with some wine and vegetable stock, and boil for a few minutes.  Then add the chops in and cook for just a couple of minutes more.  The sauce will thicken a bit and everything will come together nicely.

Pretty much any white wine with some acidity will work here, but I like to use Cave la Vinsobraise Côtes du Rhône White ($12).  It’s a workhorse wine for cooking that also drinks really well.  There’s enough acidity to stand up to the vinegar in the peppers, olives, and capers, and it still has plenty of fruit.  Plus it’s from the village that started my wine route journey, so you’ll always find it in my cellar.

1 large onion, peeled, cut in half through the poles, and sliced thin

4 pickled hot cherry peppers, stems removed, cut into 6 pieces each (remove as much of the ribs and seeds as you want, depending on how hot you like them)

Preheat the oven to 350 degrees F.  Line a baking sheet with foil, and spray the foil with some nonstick spray.  Set aside.

Put the pork chops on a plate and season them with plenty of salt and pepper.  More salt than you think you might need, about 1-1/2 teaspoons total.  Set them aside for a couple of minutes while you prep the onions, garlic, and cherry peppers.  Heat the oil in a large nonstick skillet.  Put the flour on a small plate and dredge the chops, making sure to cover all the surfaces.  Brown the chops over medium-high heat, about 2-3 minutes per side.  Transfer the chops to the prepared baking sheet and put in the oven to finish cooking, about 15 minutes.  They should be just barely pink in the middle and temp out at 140 degrees F.

In the meantime, saute the onions in the same skillet, adding a little oil if necessary, along with a pinch of salt.  When the onions are soft, about 10 minutes, add the garlic and cook for another minute.  Add the cherry peppers, capers, and olives, along with the wine and vegetable stock.  Turn the heat up to high and cook until the liquid reduces by half, about 5 minutes.  The chops should be out of the oven now, add them to the skillet and turn a couple of times to coat them with the sauce.   Serve hot.

1 Response to New Adventures on the Wine Route