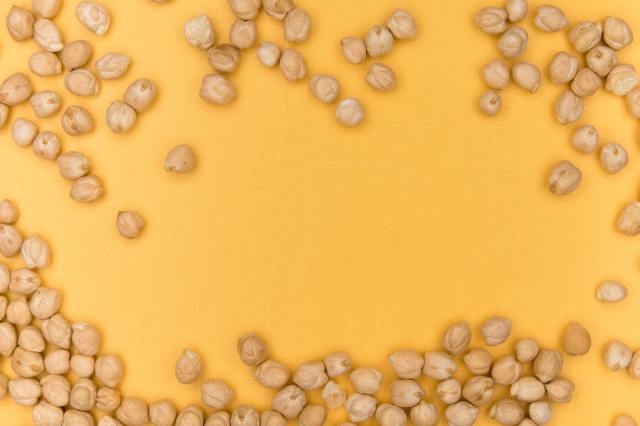 I love to use dried beans, especially chickpeas, in recipes.  But even these days, when I’m in the house more, I don’t always want to take the time.  So I modified a killer recipe for dried chickpeas to use canned — it’s done in about an hour, but tastes like you cooked it all day.  (Photo by Markus Winkler on Unsplash.)

This is the first of what I’m calling “Keeper Recipes,” things I made because I wanted to use pantry staples I had on hand — but they turned out so well I’ll want to add them to my non-social-distancing repertoire.  Enjoy!

I’ve been making lots of recipes with beans these days – dried beans, canned beans, fresh beans.  I have a pressure cooker and a slow cooker, both of which seem to be made for cooking beans.  Generally, I like using dried beans, especially when the pressure cooker has them ready in under an hour without soaking.  The cooking liquid is great for soups and is a good start to making a luxurious vegetable stock, because it gives the stock a nice texture.

But even with the pressure cooker’s relative speed, canned beans are convenient and usually tasty.  And although the staying at home thing renders an actual meal schedule less urgent, there are times when I want dinner that tastes like it cooked for hours but really didn’t.  The other advantage of using canned beans is that since they’re already cooked, you can cook them with acidic ingredients like tomatoes and get them flavored up pretty quickly.  If you cook dried beans with too much acid, they take a lot longer to cook – and sometimes won’t soften at all.

Recently, I made one of Yotam Ottolenghi’s one-pot (or pan) recipes for chickpeas: Braised Chickpeas with Carrots, Dates, and Feta.  It starts with dried chickpeas soaked overnight, then cooked in a covered casserole in the oven for a couple of hours.  Then you top it with a mixture of feta, caraway seeds, lemon zest, and parsley.  It was amazingly good.  But I wondered if I could modify it to use canned chickpeas and still get the same result without planning the night before.  It turned out really well, using a simple trick.

As I mentioned, one of the perks of cooking dried beans is the cooking liquid.  And in this casserole, all of the goodness from the chickpeas stays in the pot.  But canned chickpeas come in liquid.  So I thought if I drained them and saved that liquid, I could use some of it to enrich the result in the final dish.  You don’t want to use all of it, because it can be salty (I personally don’t use salt-free canned beans because they don’t taste as good – and it takes a long time for salt to penetrate inside them if you use them in a dish.  Lower-salt beans are a good compromise if you can find them).  And it’s pretty concentrated.  But using about a half a cup of the liquid here gives the dish a nice silkiness and a flavor boost, too.

You’ll need between four and four and a half cups of drained chickpeas, from two or three cans depending on the size.  They should give you more than a half cup of chickpea liquid, but don’t worry about it if they don’t.  Just make up the rest with water.

This is a recipe where you shouldn’t sweat about not having everything you need, there are plenty of substitutions.  I didn’t have any jalapeños or other fresh green chiles so I used a chopped up dried chipotle chile instead.  Or use some canned pickled jalapeño if you have it.  The feta topping calls for caraway seeds, which might not be in everyone’s spice rack.  You could also use cumin seeds, which would be tasty.  Finally, since I was out of fresh parsley, I used dried parsley in the topping.  Not much flavor, perhaps, but it gave everything the little bit of green color it needed.

Lots of explanation here for something that’s actually simple.  I hope you’ll try it – it made a wonderful, comforting, and flavorful dinner.  And that’s pretty much all we can ask for some days.

Adapted from a recipe by Yotam Ottolenghi in the Guardian, January 19, 2019

3 15.5 ounce cans of chickpeas, drained in a sieve or colander set over a bowl to collect the liquid — or you can use other canned beans or a mixture of beans to make 4 to 4-1/2 cups (make sure you still collect the liquid)

1 pound carrots, peeled and trimmed, each cut into 4 pieces if small or medium-sized, 6 pieces if they’re humongous – or use a combination of carrots and parsnips

Zest and juice of 1 large lemon

Measure out the chickpea liquid and reserve ½ cup.  (If you don’t have ½ cup, then use what’s there and add water to make it ½ cup.)  Rinse the chickpeas and taste one.  If it’s really soft, that’s fine.  If not, put the chickpeas in a large saucepan and put in enough water to cover by about an inch.  Bring the pan to a boil and simmer the chickpeas for about 15 minutes while you start chopping and cooking the rest of the dish.

In a large high-sided skillet with a tight-fitting lid, or in a lidded Dutch oven, heat the oil until shimmering.  Add the onion, garlic, ginger, and jalapeño (if you’re using a fresh one) plus 1 teaspoon of salt, and cook for about 5 minutes, until the onion is translucent.  Add the cumin, cinnamon, dates (or other dried fruit), tomato paste, some ground black pepper, and the chipotle or pepper flakes or pickled jalapeño (if you used any of them instead of the fresh jalapeño) and cook for a couple of minutes.

Drain the chickpeas, reserving the liquid if you cooked them further.  Stir the drained chickpeas into the onion mixture so that they’re nicely coated.  Stir in the carrots, again until everything is nicely coated, and then add either enough of the chickpea boiling water or plain water or vegetable stock to just cover everything.  Stir in the half-cup of chickpea liquid you saved from the cans.  Bring to a simmer, cover the pot, and cook over very low heat for 45 minutes.  Check every 15 minutes and stir to make sure nothing is sticking to the bottom of the pot and that there’s enough liquid.  Add some more water if needed.  You want to end up with the liquid no more than halfway up the chickpeas and carrots – not dry, but not soupy, either.  If there’s too much liquid after 45 minutes of cooking, let it boil uncovered for a few minutes to reduce.

While the pot is cooking, combine the feta, caraway, lemon zest, and parsley, and set aside.  When the 45 minutes are up, stir the lemon juice into the pot and taste for salt and pepper.  Let the chickpea mixture sit, covered, for 10 minutes.  Scatter the feta topping over the chickpea mixture.  Serve hot.