Grandma knows best, and other tales of a family winery

Posted on September 4, 2018 by firstvine

Jean-Pierre, Marion, and Antoine Pla of Domaine Marion Pla in the Languedoc. Jean-Pierre, Marion’s father, grows the grapes, Marion makes the wine, and her brother Antoine recently joined the family business as a marketer. I’m thrilled to import Marion’s wines and share her family story with you.

In February, I attended back-to-back wine shows in Lisbon, Portugal, and Montpellier, France.  I met a lot of winemakers and winery reps and tasted plenty of good wine.  I’ll probably end up buying from a few of them.  I have to think carefully about bringing on new suppliers, given the effort and up-front costs.  I’ve learned over the years that I’ll have serious discussions with far more producer reps than the number I’ll end up buying from.

But sometimes at shows you meet a winemaker and realize that (a) you really like him or her, and (b) you really like the wine, and your customers will, too.  And if, after talking (and more drinking), you also realize that the winemaker is willing to undertake all the rigmarole that’s required to export — especially to the U.S. — despite never having done it before, it’s like you’ve just discovered a winning lottery ticket in your pocket.

This trip I’m happy to say it happened with Marion Pla, winemaker of Domaine Marion Pla.  She has a 22-hectare vineyard, and makes wine in Cessenon sur Orb, a small village near Saint-Chinian in the Languedoc.  I had met Marion on an importer trip in 2013 and liked her wines, but we were a little overscheduled during the tastings so I didn’t get a chance to talk with her.  This time, when I learned she’d be at Vinisud in Montpellier, I made a point of spending more time talking and tasting.

Marion’s family vineyard goes back three generations.  Her grandparents purchased plots of land when they got married, selling their grapes to the local cooperative winery.  Her father, Jean-Pierre, initially became an electrical engineer, but in 1978 decided to take over farming from his parents, also continuing to sell grapes to the cooperative.  Marion wanted to make her own wine, and so studied winemaking at university in Montpellier.  After graduation, she started gathering real equipment to replace the small setup her family, like practically all grape growers, used to make a little “vin du garage” for their own enjoyment.

She also began the process of organic certification right away.  It was, and remains, particularly important to her, but she was happy that her father felt the same way about it.  After all, the real work of organic production happens in the vineyard, and Jean-Pierre is still the grape grower.  Marion told me that Jean-Pierre has a real love of learning, and continues to study new environmentally-friendly farming techniques, even now in his 60s.  His grape production had been practically organic for years, so it took no convincing to get him to agree.

The label for Petit Bonheur, Marion’s rosé. Its first vintage was 2008, a year after her first production. The fingerprint on it is from her younger brother, Antoine, who picked up a bottle of one of her first wines and inadvertently left his thumbprint on it. She decided to put the thumbprint on all her labels.

The family vineyard produced only red wine grapes when Marion graduated, so she started making red wine.  Her first vintage, in 2007, produced a total of 2,000 bottles of various reds.  She still makes one of those first blends today.  Premier Sceau is named for her younger brother Antoine’s fingerprint – he picked up one of the freshly-filled bottles and inadvertently left an imprint of his thumb on the plain white label Marion had put on it.  In French, “sceau” means seal, as in seal of approval.   It’s also a word for fingerprint.  In this case, it worked out as both.  Marion decided his thumbprint was his seal of approval for the wine, so she now uses the fingerprint on her labels.  (She jokes that 17-year-old Antoine joined the family business at that moment, whether he wanted to or not.  He recently started doing marketing work for the winery.)

Today, she makes three reds, a white, and a rosé, all AOC Saint-Chinian, plus AOC Languedoc bag-in-box red and rosé.  The Saint-Chinian wines all have interesting names.  In addition to Premier Sceau, a blend of Syrah, Grenache, Mourvèdre, and Carignan, the two other reds are Conviction Intime, equal parts Grenache and Syrah, and Profonde Gratitude, which is 90% Grenache.  Profonde Gratitude means just what it sounds like in English.  Marion chose the name because the wine is similar to the Vin du Garage she helped her father make when she was a child.  She is, she says, still profoundly grateful to be doing something she loves and be part of a family business.

I’m importing the Profonde Gratitude, plus her rosé and white.  The rosé is 40% Syrah, 35% Grenache, and 25% Cinsault.  Marion named it Petit Bonheur, which means little delight.  It is that; fresh, light fruit flavors, with a beautiful color and aroma.  (And if you choose to read “Bonheur” as if it were an English word, well, a little of that never hurt, either!)

But when I tried her white wine, Les Larmes de Jeanne, I couldn’t understand why she would give a wine such a seemingly unhappy name.  It means “Jeanne’s Tears.”  Marion told me the story of its development.  She and Jean-Pierre decided they wanted to make a white wine.  Since they weren’t growing white-wine grapes at that point, they began looking for land that already had vines for white wine grapes growing on it.  One evening, at dinner with Jean-Pierre’s father, they discussed the options.  The grandfather said that one of those parcels of land was one he had his eye on back when he and Marion’s grandmother were first married.  But life then was hard and so was the work – her grandmother Jeanne put her foot down, and even began to cry when her husband wanted to spend what was for them a vast sum of money on new land when things were already so difficult.

Marion and Jean-Pierre decided to buy the land her grandmother had been so upset about.  And also to tell that family story through the wine by calling it Les Larmes de Jeanne.  It’s equal parts Roussanne and White Grenache, so it definitely doesn’t taste like tears.  But its minerality and little bit of salinity aren’t out of character for the name, either.

As I’ve mentioned before, people who make wine put a lot of themselves into the product.  Making wine really isn’t like making (or selling) anything else.  Importing their wines makes me feel like I’m a small part of their businesses.  And in some cases, when it’s a small family business, I get to feel like I’m sort of a family adjunct, too.  I’m looking forward to getting to know this family better – and bringing over more of Marion’s wines.

The mixture for Dorie Greenspan’s Potato Chip Tortilla in the skillet. No one will ever guess there are potato chips in there!

I’m delighted to give you a recipe for one of my favorite things to serve with wine.  Dorie Greenspan’s book Around My French Table has become a go-to source for great things that I can make for wine tastings.  Her Potato Chip Tortilla, a quick version of the traditional Basque tortilla omelet with potatoes, is delicious and easy to make.  And, most importantly, it’s an excuse to buy potato chips!  The recipe calls for 3.5 ounces of chips, which, conveniently, is half of a seven-ounce bag.

I asked Dorie for permission to reprint the recipe here and she graciously agreed.  I don’t need to give more explanation except to tell you that after making it several times, it’s easy to overcook it, which I did in the one I photographed for this post.  The tortilla still tastes good if it goes a bit too long, but it’s a little dryer.  The recipe calls for a two-step cooking procedure, first in a skillet on the stove to set the sides, then under the broiler to cook the top.  The sides are set when you can put a heatproof spatula between the tortilla and the side of the skillet, gently press toward the center a bit, and feel that the sides are secure – liquid isn’t running out of them.  The sides of the top of the tortilla around the pan should also be set.  Then, when you put it under the broiler, take it out before the top browns.  It will continue to cook for a couple of minutes and will have a perfect texture.  I think it’s best at room temperature. 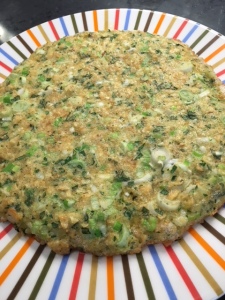 The finished tortilla, ready to serve. It pairs well with practically any wine.

The tortilla pairs well with pretty much every wine I’ve served with it.  Of course, I’m hoping you’ll try one of Marion’s wines:  Les Larmes de Jeanne ($16), Petit Bonheur ($14), or Profonde Gratitude ($17).  And don’t forget to put the rest of the bag of potato chips out with them…unless, of course, you’ve eaten them already!

From Dorie Greenspan’s Around My French Table, reprinted with the author’s kind permission.

Serves 4 for lunch, 8 for hors d’ouevres

¼ cup minced fresh herbs, such as cilantro, parsley, or basil, or a combination

Pinch of cayenne or piment d’Esplette

Put the potato chips in a bowl, reach in, and crush the chips – a noisy, greasy job that leaves you with potato-chip fingers you’ll want to lick.

Put the eggs, onion or scallions (if using), herbs, garlic, and cayenne or piment d’Esplette into another bowl.  Season with a little salt and pepper and whisk to combine.  Pour the eggs over the chips and stir to blend well.

Place the skillet over medium heat and pour in the olive oil.  When the oil is hot, give the eggs and chips a last stir and pour them into the pan.  Use a fork to push the mixture out to the edges of the pan if necessary, then turn the heat down to low.  Cook the tortilla for 2 to 3 minutes, or until it is set around the edges, including the top edge.  (Being set is more important than the timing, so just keep watching the eggs.)  Remove the pan from the heat and run a heatproof spatula around the edges and under the tortilla in case it has stuck to the pan.

Slide the pan under the broiler and cook until the top of the tortilla is set, about 1 minute.  Slide the tortilla onto a serving platter or board, and serve warm or at room temperature.

2 Responses to Grandma knows best, and other tales of a family winery